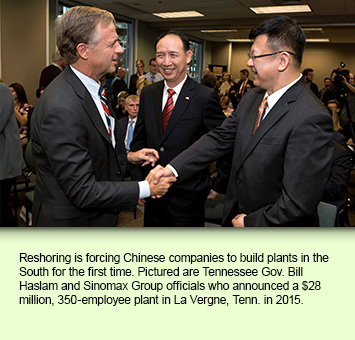 For those who still languish over “losing to China” or believe that the economy is still in recession, wake up and smell the data. Economic development in the South was about as good as it gets in calendar year 2015 according to the data (see page 36). And as for China, borrowing a quote from the late football coach Bear Bryant that he made in the half-time locker room down 15-0 to Georgia Tech in 1960, “We got ’em right where we want ’em.” For those of you who don’t know the rich history of Alabama Crimson Tide football, Bama scored all of its 16 points in the fourth quarter, kicking a field goal on the last play of the game to beat Tech 16-15.

We do have China “right where we want ’em.” Parts of this country, specifically the South, have become so cost competitive for industry that we are actually beating China at its own game, which it successfully implemented by capturing U.S.-based manufacturers by the thousands from the mid-’90s to 2010.

According to the Reshoring Initiative, last year, 60,000 U.S. manufacturing jobs are estimated to have left the U.S. for China while 67,000 returned, or reshored. We are winning with China now and there is not much that country can do about it. The tables have turned on China when it comes to making things for North American consumption. They must now play by our rules. We — our U.S.-based corporations — no longer have to play by theirs.

In fact, most corporate officials, including spokespersons for Chinese companies, freely admit it costs less to manufacture most goods in the American South for U.S. consumption than in nearly all parts of China. And if it is becoming nearly impossible to make a profit from making goods in China for North American consumption, where does that leave Chinese companies? It puts them in a forced position to build factories here if they want to sell products to the largest economy in the world. That data can’t be overlooked.

For example, the cumulative value of Chinese investments in the U.S. in 2005, including real estate, acquisitions and greenfield projects, added up to just $2.5 billion. That isn’t even the cost of one decent size petrochemical plant in Louisiana or Texas. In 2006, the Chinese invested just $200 million in this country.

Fast forward to 2010, when the U.S. and the South became incredibly competitive for a variety of reasons (most of which centered on the low cost of energy from the fracking frenzy), China invested about $5 billion in the country. In 2012 and 2013, it was $14 billion each year, and some are predicting China will join the U.K., the Netherlands, Japan and Germany at the top of the foreign direct investment list in the U.S. this year. If so, it would mean China could invest as much as $30 billion in the U.S. this year.

So, for those who think we are “losing to China,” check the data you are using, because it is outdated. Not only has the bleeding of manufacturing jobs offshored to China slowed to a trickle, the very thing that is enticing companies to reshore is also forcing Chinese companies to build plants here in the South.