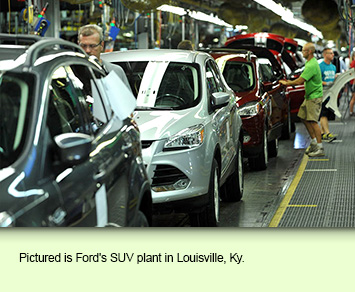 Today, factories in the U.S. make twice as much product as they did in 1984. And they are doing it with one-third of the manufacturing workforce. In fact, the output of durable goods in 2015 was the highest in the nation’s history. So, we do have a strong manufacturing base, at least in the South, much of the Midwest and parts of the West, and it is getting stronger because on a cost-basis, we can compete with any major manufacturing nation in the world.

As for the manufacturing sector, 2015 was the year of the automotive industry. Ten of the 17 major automotive assembly plants in the Southern Automotive Corridor are currently expanding and that OEM activity has forced the supply chain to those plants to grow as well. Automotive has led all sectors in the number of large projects in the South 21 of the last 22 years. The only time automotive didn’t lead all sectors was a year in the late 1990s when call centers posted a ridiculous total of deals.

In a record-setting year, the automotive industry in the South announced 111 big projects of the manufacturing sector’s 424 deals in 2015. That’s more than one-quarter of all manufacturing projects meeting or exceeding 200 jobs and/or $30 million in investment coming from the auto sector. There is no question what the most important industry in the South is. It is the automotive industry, hands down.

As written, automotive was the No. 1 industry — service or manufacturing — by a large margin in 2015. The 111 projects meeting or exceeding our thresholds was also a 22-year record. At no point since 1994 has any industry topped 100 projects meeting or exceeding our thresholds. And why not, U.S. car sales in 2015 set a record, beating the record reached 15 years ago. Automakers sold 17.5 million cars and light trucks in 2015 and overall Americans spent about $570 billion on the new vehicles. Automotive sales are a prime indicator of how the economy is performing. Cheap gas and low interest rates were also factors in the car sales record.

Also in 2015, the Southern Automotive Corridor gained two plants, both in the Charleston, S.C. region. Volvo and Daimler Vans are the first two major automotive plants to announce new plants in the South since Volkswagen’s announcement in 2008 that it would build an assembly plant in Chattanooga, Tenn. And with more than half of the plants in expansion modes, with automakers spending billions on more space and equipment, the automotive industry in the Southern Auto Corridor has never been more active.

And it is not just manufacturing that the South is getting with the automotive industry. Mercedes-Benz is relocating its North American headquarters from New Jersey to the Atlanta metro. Toyota will be moving upwards of 4,000 people from mostly California as it relocates its North American headquarters to Plano in the Dallas-Fort Worth metro. Of course, Nissan relocated its headquarters to the Nashville metro several years ago. Those projects are huge for the Southern Auto Corridor in that they bring value-added automotive jobs in addition to the manufacturing base.